I was kinda disappointed in this film. While the 3-D effects were top-notch, the story and some of the animation didn't grip me as well as I had hoped. I was expecting this to be Dreamworks' breakout animated film that would raise them to Pixar's level, but it just felt lacking. There is some character development and growth (if you'll pardon the pun) with Reese Witherspoon's 50-foot tall woman (they never actually say how tall she is, which was surprising), but none of the other characters really change. Well, except for Insectosaurus, but to tell you more would be a bit of a spoiler, although it'll be pretty obvious when you see it. There is a bit of Monsters Inc. and The Incredibles in the film, but the story just doesn't tug at your heart as well as those films. Monsters vs. Aliens gets a grade of C+.

While I was never really familiar with the comic-book (which I always considered as Reading for Comic-Book Snobs, like most of Allen Moore's work), I was surprised by how much I actually like this movie. It's far from any super-hero movie ever made, but like its source-material it seems to make you want to think, about the end of the world and what can and could be done to prevent it. Again, I'm not familiar with the book, but it is easy to come to the conclusion that The Incredibles and season one of Heroes were influenced by it. I didn't mind the violence so much (although it can be very violent and dark), but some of the music, while probably appropriate, seemed jarringly out of place. Dr. Manhattan's full-frontal male nudity might make some people uncomfortable, and the one sex-scene that actually reached a climax (but had the oddest musical accompaniment) may look too much like something that you'd see late-nights on Cinemax, I wasn't all that bothered by it. While the heroes in this film aren't all likable, I'll give it a grade of B.

1) Comment to this and I will give you 3 people.
2) Post this meme with your answers.
3) Provide pictures and the names of the 3 people.
4) Label which you would marry, shag, and throw off a cliff.

handmaiden_yane and I were able to catch a hockey game together during my visit to Phoenix last week and here is the view from our seats. 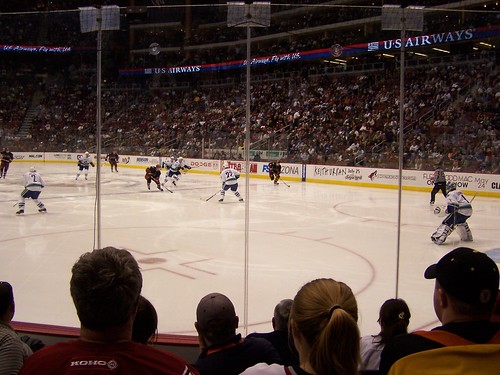